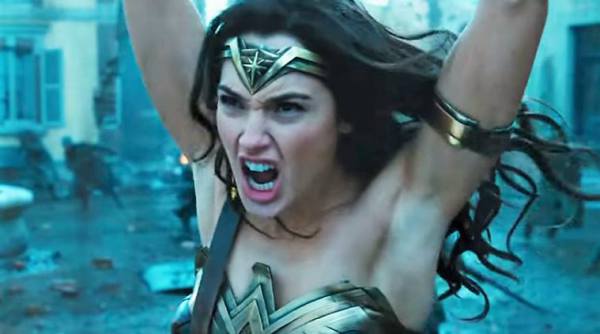 Forget fighting in the trenches, leading soldiers into battle, or charging through No Man’s Land — in Wonder Woman, Diana Prince has truly achieved the impossible: She’s given us hope for the future of comic book movies. (MILD SPOILERS)

With just four weeks since its theatrical release, the film is estimated to become the top-grossing DC film of all time with more than $318.4 million in North America alone. It’s already surpassed 2013’s Man of Steel ($291 million) and is expected to beat last year’s Suicide Squad ($325.1 million) as well as Batman v Superman: Dawn of Justice ($330.4 million) — all within the next few weeks.

As a rather disappointed viewer of the three aforementioned DC blockbusters, I sincerely believe that Wonder Woman is one of DC’s first films that truly deserves its success. Let’s be honest: from Suicide Squad to Green Lantern to Batman v Superman: Dawn of Justice, DC’s big-screen offerings to date have generally only offered various levels of disappointment (with the exception of Christopher Nolan’s Dark Knight films).

Suffice to say, if you’d told me six months ago that a movie made by DC Comics would emerge as one of my favorite superhero films of all time, I would’ve informed you that you’re pronouncing “Marvel” incorrectly.

Yet, here I am, grinning like an idiot through my second viewing of Wonder Woman, cheering obnoxiously as the Princess of Themyscira kicks some ass. Hell, I’m ready to fork over cash for my third viewing (purely for research purposes, of course).

And I’m not the only one: With strong reviews from critics and audiences alike, Wonder Woman has given us an equal-parts spirited, earnest, relatable, badass lead heroine — the likes of which we’ve never seen before in either the DC or Marvel cinematic universes. By the end of its theatrical run, Wonder Woman may even outperform DC’s highest-grossing films of all time: 2008’s The Dark Knight ($534.9 million) and 2012’s The Dark Knight Rises ($448.1 million).

Of course, the film isn’t perfect; it still suffers from some of the usual superhero movie tropes, and I believe it’s important to point them out:

It’s important to note, however, that while Wonder Woman isn’t a perfect film, it’s damn good. On my own superhero-movie scale, I’m comfortable ranking this film up with my personal favorites including The Dark Knight, Captain America: The Winter Soldier and Guardians of the Galaxy. These films can all attribute their success to an undeniably brazen, singular spirit burning at their cores that set them apart from the rest; and Wonder Woman has emerged as another much-needed breath of fresh air for superhero comic book movies.

Despite some rather impractical battle garb (as I mentioned above), the Amazons of Themyscira do not disappoint when it comes to incredible action sequences. Never did I imagine that a group of women on horseback fighting with shields, swords, bows and arrows would enthrall audiences nearly as much as they surely did in this film.

And, to be fair, I am a bit conflicted calling the movie out for its scantily-clad females after watching Connie Nielsen and Robin Wright absolutely slay (literally) as Hippolyta and Antiope. These women prove that being an actress over 50 — along with all of the wrinkles, scars, and age spots that entails — means absolutely nothing when you can fight like a champion.

And as for the rest of the Amazons, I’m happy to report that they are also not airbrushed supermodels. In fact, real-life athletes make up the film’s badass Amazons, including Swedish professional fighter Vall Beijner and equestrian Doutzen Kroes (although technically, she is also a supermodel).

But the standout fighter among them is none other than Robin Wright. Honestly, as amazing as Diana or the other Amazons are, I don’t think any of their fight sequences are nearly as chills-inducing as those of Antiope in the film’s first battles on Themyscira. Stand aside, Princess Buttercup/Jenny Curran — THIS is Robin Wright in her prime. I only wish we could see more of her.

All in all, the fight sequences in Wonder Woman are definitely reminiscent of those in Zack Snyder’s 300, where impressive battle choreography is enhanced by perfectly-utilized slow-motion shots and subtle CGI effects. Sidenote: If DC could achieve this again, AKA getting some of Snyder’s influence while also keeping him out of the director’s chair, I’d be about 200 percent more excited for the upcoming Justice League film.

Essentially, after watching every fight scene featuring the Amazons, now all I want is to charge at groups of people screaming “SHIELD” in the hopes that they’ll launch me fifty feet into the air.

Admittedly, I was more than skeptical when news surfaced that Gadot would be the new Wonder Woman. Until that point, I had only seen her in the fifth and sixth installments of the Fast and Furious franchise where her most notable performance is, according to Google, “the bikini scene from Fast Five.” Thus, past-Christine deemed her unworthy of the esteemed Wonder Woman mantle.

Gadot effortlessly overcomes the immense challenge of successfully portraying a compelling superhero: From her earnest, playful innocence with Steve Trevor (brilliantly-acted by Chris Pine…but more on that later) to her stern-faced focus in battle to her fiery, fervent fierceness as a guardian of men — Diana Prince demonstrates all the necessary depth and dimension to lend the film plenty of emotion without being “emotional.”

Plus, it’s her lithe athleticism paired with loud, Rambo-esque intensity that gives audiences the perfect level of action and movement that we crave from our superhero films.

In short, Gadot is equal-parts action lead, romantic lead, comic relief, and emotional core of the film all at once, and it works beautifully in a way that we’ve never quite seen before in a comic book blockbuster film.

Come for Wonder Woman; Stay for the Whole Eccentric Team

It’s important to note that Gal Gadot’s stand-out performance could not possibly have worked without her fantastic cast, just as Diana herself could not have succeeded without her equally heroic counterparts.

In particular, Captain Steve Trevor is a wonderful complement for Diana in this film. Chris Pine does a masterful job at playing opposite Gadot’s boldness with an equally impressive subtle deference. His character is a spy/captain/war hero, and Pine demonstrates that he has the skill to stand out as an obviously strong male character — without even remotely threatening to overshadow Diana.

Despite the fact that Steve clearly doesn’t share in Diana’s naiveté regarding the world of men (particularly in her passionate belief that all men are inherently good), he still regards Diana with a kind of awe-filled respect. Thus, their scenes together range from hilarity to heartbreak, all with pure chemistry simmering between the two.

Even when she takes matters into her own hands (which happens often, as she quickly becomes frustrated by the wanton death and destruction of the war), the writers refrain from having Steve express bitterness at her willfulness; instead, he is able to acknowledge the noble wisdom in her actions and do what he can to help her, including gathering a team of (equally-awesome) men.

A female lead isn’t the only noteworthy aspect of the film: Wonder Woman had representation for all types of people, not just women.

Luckily, Wonder Woman bypasses this issue rather gracefully, giving each man’s memorable personality adequate time to shine through small but significant interactions with Diana and each other.

Major kudos go out to Patty Jenkins and the writers for developing these characters with just as deft a hand as they did for Diana’s character, as well as putting a spotlight on lesser-known heroes of war: veterans suffering from PTSD and persecuted people/minorities who fight for freedom despite having little access to freedom of their own.

And most importantly, while Diana tackles every obstacle in her way with fierce determination, I strongly appreciate how each character in the film reacts to her actions. Like Steve Trevor, these men all quickly seem to recognize the depth of Diana’s strength and intelligence, and they adjust accordingly. Whether they’re backing her up on the field of battle or working in the shadows to make sure her mission succeeds, the film makes it clear that this small squadron of men is every bit as noble as the Amazonian princess herself.

So, does this film make up for the fact that many DC films in recent memory have been lackluster at best? Absolutely not, but it’s a start. Does it increase the hype for the upcoming Justice League film? Marginally, although my heart sinks knowing that it won’t feature more Amazon warrior battles. And until I see more quality DC films, I’m skeptical that Wonder Woman isn’t a fluke.

But damn, this film is a standout success amid a recent slew of “blah” superhero blockbusters, and it deserves all the success and praise it gets.