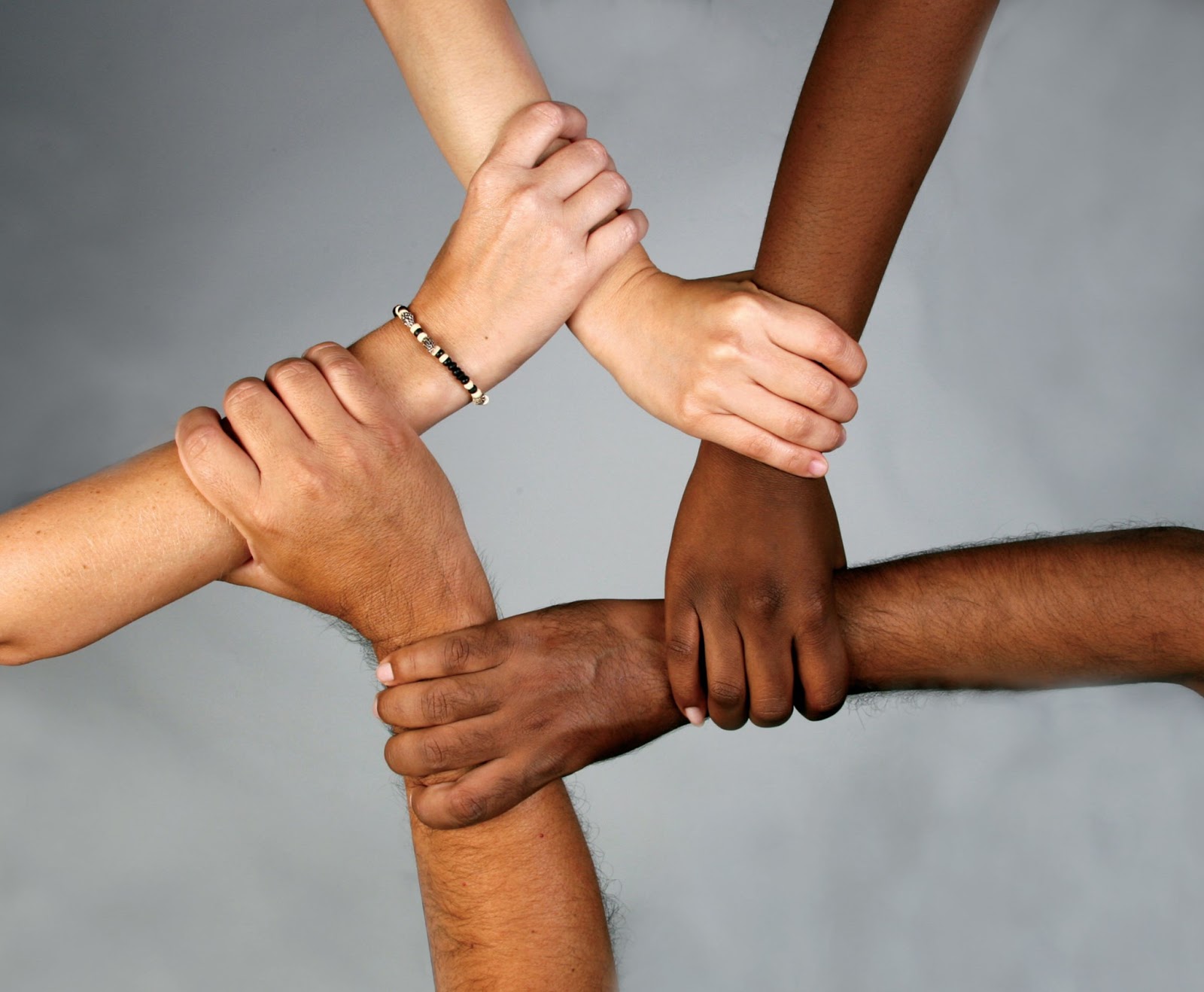 I can’t believe it, but the United States presidential election is finally about to happen.

Before you frantically click away and never return, take comfort—this post contains no political endorsements. You won’t be subjected to campaign ads or scathing political commentary. There won’t even be mention of any particular political party.

Instead, I want to address something far more insidious than our current political landscape (which I imagine at this point as a dry barren wasteland almost entirely engulfed in flames, pictured below); I want to talk about the poisonous mindset that fostered it.

In an earlier post about how to practice civil discourse, I talked about the increasing number of people who seemingly lack the ability (or the willingness) to debate their beliefs. More and more people are falling into the trap of spouting their opinions to anyone who will listen; and yet these same people respond with hostility or disinterest when presented with valid yet opposing viewpoints.

It’s a rampant epidemic characterized by a mindset that seems to say, “if you’re not with me, you’re against me.”

After an entire campaign season dominated by this thinking, it seems like many of us (myself included) have had enough. Months of opponent bashing, trash talking, and insult trading have finally led us to a breaking point: people are beginning to realize that, together, we need to minimize this “us vs. them” mentality.

Of course, we’re all guilty of thinking this way. Whether based on the media, friends and loved ones, or our own experiences, it’s easy to use sweeping generalizations to write off huge groups of people as “the enemy.”

It’s the embodiment of humans’ rash and seemingly inescapable tendency to generalize. Instead of utilizing rational thought, we generalize enormous groups of people into ridiculous stereotypes because it’s easy and (I guess?) makes us feel better about ourselves. Rather than focusing on the ideals that connect us, we embrace ignorance and bigotry. We perpetuate an “us versus them” mentality and blame it on “them.”

Why? Simply because we’re determined to accept the world only in the simplest, black and white terms. Doing so helps us understand a world that’s vast and impossibly complex in almost every way. It helps us ignore the human experience we share with every other person on the planet. It appeals to our selfish tendency for assuming that our lives are somehow more important or meaningful than everyone else’s.

But by doing this, we miss out on so much. By adopting an “us versus them” mentality, it becomes harder to acknowledge and understand the gray areas that embody the world as it really is. 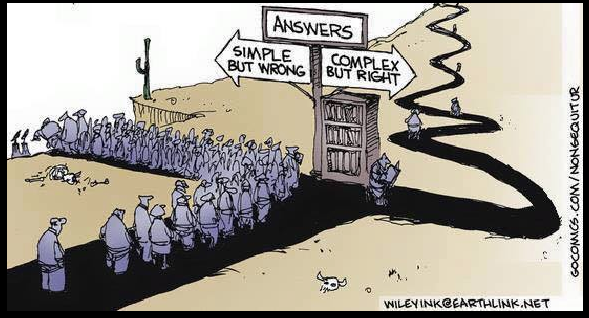 There’s a popular activity known as people-watching (it’s exactly what it sounds like). As someone who enjoys sitting alone with my thoughts for long periods of time, I’d personally consider it more of a pastime because I am a #creep.

Essentially, people-watching is appealing because it’s diabolically fun to judge strangers based on their clothes, their manner, their facial expressions; it’s fun to play their lives out in ridiculous little dramas based on the briefest of moments, the quickest snapshots of them.

In college, I inadvertently did this a lot while sitting on benches around campus, killing time between classes. But eventually something began to trouble me about the whole affair: for every individual who came across my path, I realized that I couldn’t resist the urge to immediately pick out our differences and very harshly judge that person. Sometimes I’d even get annoyed with him/her for something as meaningless as the shoes they wore (which was ridiculous because I didn’t know the first thing about him/her). It was draining, and yet I couldn’t stop.

So, I began consciously trying to do the opposite. I encouraged myself to feel kindness toward these strangers, to strive for understanding and shared humanity.

Author and blogger David Cain talks more at length about this thought-shift in his post titled How to Be a Good Stranger (which I highly recommend, along with his blog on mindfulness and the human experience):

I wonder a lot about the private grievances (and fondnesses) that arise between strangers, as we briefly pass into and out of each other’s lives. Imagine if you could hear every verbal thought that occurs between strangers during a single minute in a typical public square, airport, or streetcorner.

I would love to think that we’d hear more words of compassion, fondness, and willingness to help than words of disdain, but I really doubt that. Casual coldness to strangers is probably the norm.

But every norm has exceptions. You certainly have had secret allies, at times you will never know. And you can also be one, any time you like.

It feels kind of ridiculous at first, seeing a random person and assuming only the best, nicest things about him/her—and yet, I realized that this was no more ridiculous than assuming only the worst. It was a fascinating exercise in practicing empathy and understanding.

Imagine what would happen if we all resolved to approach others in this way, both in real life and online. What would we learn about each other? What would be learn about ourselves? How would the world change?

It’s time to let go of the hate, no matter how fun or addictive it is. It’s never too late to lay down the hatchet, embrace our similarities and indulge in our desire for peace for the greater good. Take it from fake-Hillary and fake-Donald in this particularly brilliant SNL sketch:

Or take it from the latest Avengers movie: 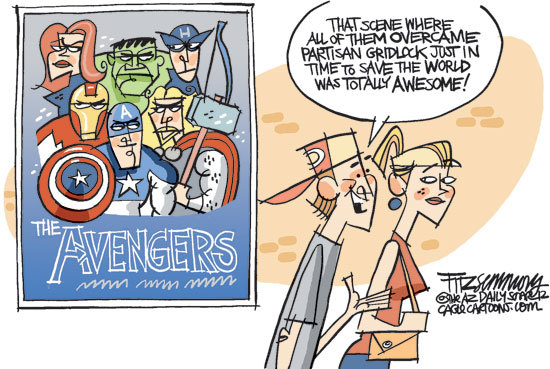 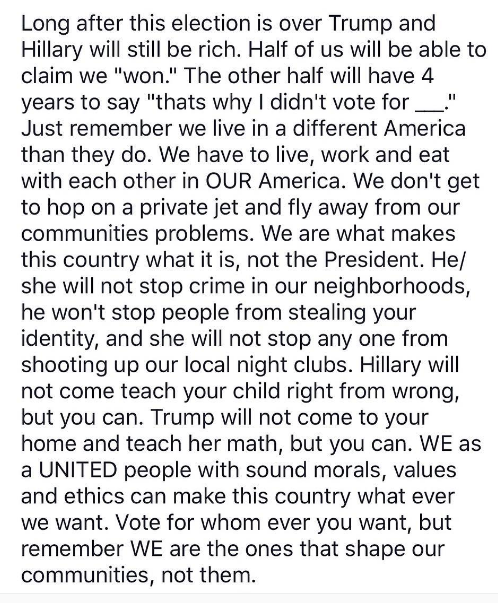 Don’t forget to vote tomorrow, but also keep in mind the most important thing: that we remember kindness and our shared humanity.