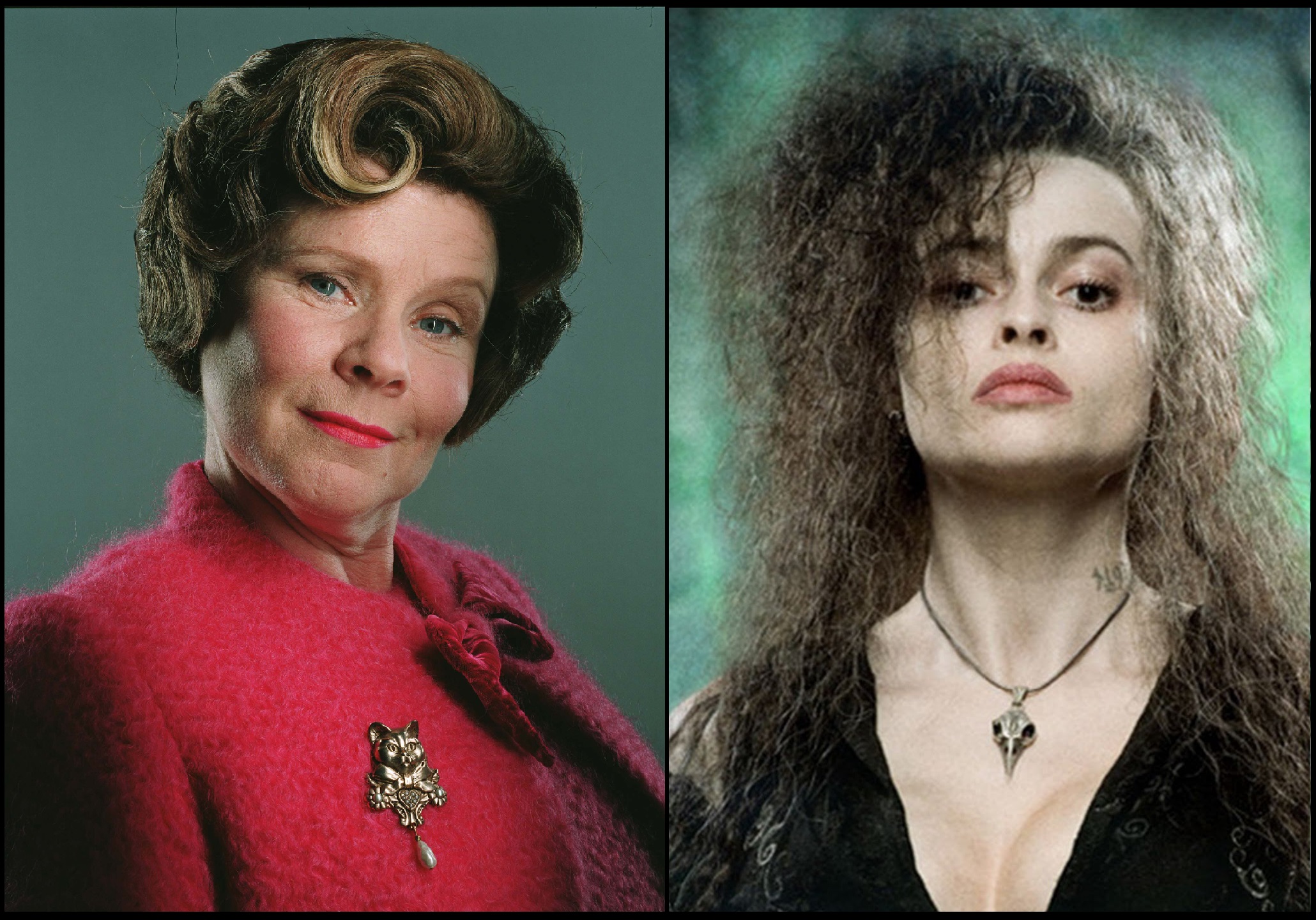 In the words of Rufus Scrimgeour: These are dark times, there is no denying.

Thus far, 2016 has been a year largely punctuated by violence and controversy. This is true worldwide but applies especially to the United States, which is currently in the heat of a particularly interesting election year.

It’s August 2016: We’ve wrapped up conventions for the two major U.S. political parties to rally support and tighten their message to voters. And at this point, it’s already a foregone conclusion that one of these two candidates will become President in November.

Ideally, our political system would’ve utilized these conventions to block undesirable or unfit candidates from obtaining one of the world’s most powerful political seats—and if that were the case, the purpose of this post would be to poke fun at the U.S. political environment as it stood before the country’s more rational voices decisively brought back the balance. Before this election cycle, I never imagined that the United States would allow such open-faced corruption or moronic buffoonery to run rampant among its top presidential candidates—or worse, that the U.S. would in turn become defined by these characteristics as a country.

And yet, that’s exactly what we’re faced with.

As evidenced by the controversial atmosphere surrounding the 2016 presidential election, something in this country is very broken on a deep level.

Put simply: On a daily basis, I am bombarded by incessant reports of all the fucked up things one candidate has done in her lifetime while also being inundated with claims of all the equally fucked up things the other candidate has pulled during his lifetime, all while simultaneously being told that the claims about both candidates are both completely true or completely false depending on whom I ask.

I strive to make informed decisions based on indisputable truth—by what each candidate has distinctly, publicly said or done (not party affiliation, general hearsay, or trivial speculations about a candidate’s personal life); but the truth is impossible to reveal without a concentrated effort to find straightforward, unbiased information. And when personal research finally does yield truth, it’s terrifying. Because the truth is that so many of those fucked up things are true on both sides.

Then you realize that in this structured two-party system, there’s virtually nowhere else to go and that’s not about to change. The U.S. voting public is being forced to choose between two un-electable candidates—and it’s almost inevitable that one will become the future leader of our nation.

Short of voting (obviously), sharing snippets of my beliefs on social media (largely ineffective for actual change), or running for office myself (lol), I feel utterly helpless about the current state of U.S. politics and its implications for our future.

So I’ve put my exasperation to useless purpose and decided that the candidates remind me of two particularly villainous characters in Harry Potter (one of the most well-written, iconic stories of our time, by the way), and I feel that these comparisons perfectly embody the current dilemma of choosing a winner.

Voldemort may be the big baddie of the series, but you’d be hard-pressed to find someone who doesn’t possess an equal (or greater) amount of vitriol for Ministry of Magic official Dolores Umbridge. While Umbridge briefly secured a position as the Headmistress of Hogwarts in Harry Potter and the Order of the Phoenix, she also permanently secured a spot as one of the most hated characters in the Harry Potter series.

This comparison mostly holds water when comparing Umbridge’s role in the Ministry of Magic to Clinton’s role in the U.S. government: She is the direct product of an obviously corrupt institution designed to keep the status quo (whether that status quo benefits its citizens or not). Within this system, she has worked hard for most of her life to climb to a place of power—but not without making enemies and some questionable choices, most of which reveal cracks and systemic misconduct on a major scale. This system, founded to protect and serve its citizens, is extremely bureaucratic and thus slow to accept change, which also makes it easy to corrupt. It’s also governed strongly by self-interest, so that those who resist drastic change tend to have an easier time rising to power.

As a result, this candidate tends to get away with some real shady shit, fully confident that the government would never turn against her. And chances are, it will continue to support her indefinitely.

Okay, so I’ve been seeing a lot of people comparing Donald Trump to Lord Voldemort, aka the character who embodies evil in the Harry Potter series. While I generally understand the comparison that both individuals tout messages of hatred and intolerance, I’ve got to object out of some level of respect for Voldemort as a villain: Since childhood, Tom Riddle was a cold, calculating boy who yearned for power over all others. This motivation was so strong that eventually Riddle resorted to slicing his soul into seven pieces and using dark magic to gain unimaginable power and (presumably) everlasting life.

I don’t believe any of these chilling, badass, evil qualities even remotely apply to a buffoon like Donald Trump. Instead, I’d like to offer a more fitting Harry Potter counterpart. 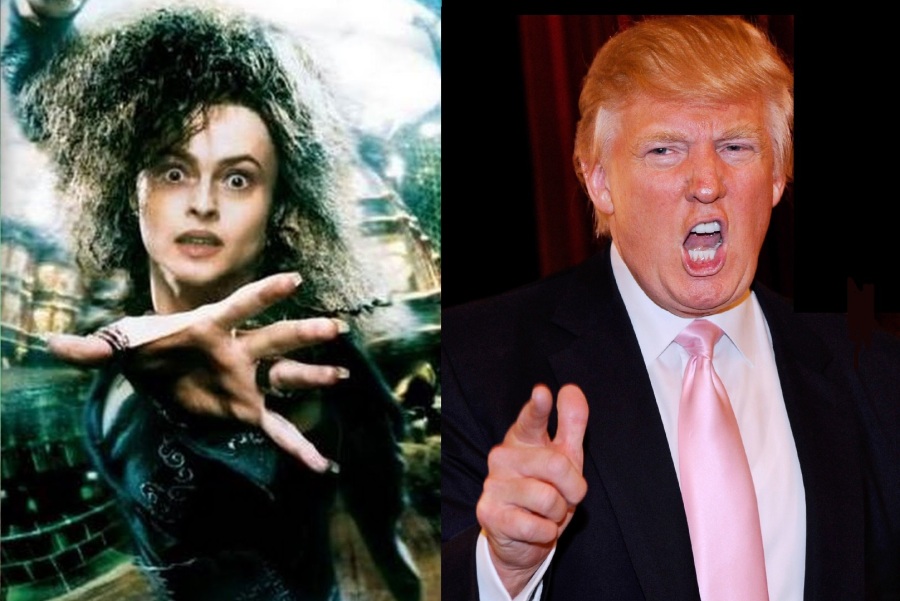 Bellatrix is one of Voldemort’s favorite followers and wears her Dark Mark with pride. And while she’s arguably a strong fighter and loyal follower, that doesn’t negate the fact that she’s also an blatantly batshit-crazy loose cannon with no real purpose in life other than to pander and obey Voldemort’s sinister plans in exchange for a seat of power to hopefully do whatever she pleases.

She was born into a wealthy, imperious family that strongly believes in maintaining the blood purity of the wizarding community. Using this “Pureblood” mentality, Bellatrix’s family considers itself superior to any family with lesser bloodlines (“Mudbloods”) and especially superior to most ordinary human beings without magical blood (“Muggles”). As a result, Bellatrix thinks incredibly highly of herself and uses this haughty disdain of Mudbloods and Muggles to gain followers and support for her cause. But while Voldemort makes his plans for world domination, Bellatrix has no real plan; instead, she delights in wanton violence and those special moments where she can let her insanity loose without a care in the world.

She doesn’t care what people think about her as long as she has power, which is why she rarely has a filter for anything she says or does—but it doesn’t really matter considering that her followers strive to emulate her and thus inexplicably love and respect her more for it.

A friend of mine recently made the above statement in regards to the presidential elections (and its implications can definitely apply beyond that). Obviously the reasons for the current state of our nation are a complex, interlaced web of social, cultural, economic and political problems, all culminating in the absolute circus that is our current political landscape. And further fueling the fire is a mass tendency for ignorance—a dangerous mindset that somehow seems to spread despite the wealth of information available in a country that’s as privileged and advanced as the U.S.

We can’t ignore the fact that certainly some things are better than they’ve ever been in the past, particularly in terms of acceptance and tolerance and understanding among the general public.

Maybe it’s the optimist in me but I truly believe that from a distance, the colorful painting that embodies the overall picture of the United States is ever-improving. The problem reveals itself when you zoom in, when you recognize the ugly splotches of hate and ignorance splattered here and there across the canvas. They certainly don’t cover up the beauty, but they’re sure hard to ignore once you’ve noticed them.

I don’t have any answers to the current situation, but I do feel like there’s no “right” decision. What do we do when given the choice between two evils? Do we make our deadly choice, or do risk paving an alternative path?

Whatever the answer, it has to be all or nothing. No divisiveness, no controversy. And that worries me, because by all accounts, it seems like we’ve forgotten how to do that.

Because, truly, “we are only as strong as we are united, as weak as we are divided.” More proof that immense wisdom can be found throughout the Harry Potter series (a gift to us mere mortals from the mind of J.K. Rowling). Her words ring true through a particularly legendary Headmaster of Hogwarts:

“We are only as strong as we are united, as weak as we are divided. Lord Voldemort’s gift for spreading discord and enmity is very great. We can fight it only by showing an equally strong bond of friendship and trust. Differences of habit and language are nothing at all if our aims are identical and our hearts are open.”

– Albus Dumbledore, Harry Potter and the Goblet of Fire

That time I took a cute pic in Austin specifically for the gram and then forgot to post it for 6 months, so now it's a summertime throwback ✌ . 📷: @jojostevens47
Random story about this ring 💍 After working for months with @barioneal (with a design assist from @itsceekim) to create this custom-made, ethically-sourced engagement ring, @frankie_gii then bought a tiny glass jar and put the ring on a bed of fluffy cotton, all so he could propose with something special instead of the traditional ring box. Plus he knew I'd appreciate the aesthetics 😘👏 Thanks for always going the extra mile for me Buu, & happy Valentine's Day everyone! 💕
Luckiest gal on Galentine's Day 🙋‍♀️ #tbt
The best room in the house? Wherever @hellojoansnow happens to be majestically lounging ❤ . . . Wedding photo by the incomparable @jessicamannsphotography 🍂🍁
Late post from #SchmoedownLive this past weekend in NYC 🙌 Thanks to the entire @theschmoedown family for an amazing night (and helping us celebrate @frankie_gii's birthday)! Season 7 is gonna be 🔥LIT🔥 #TheNewEra
Lurve you, bday boy @frankie_gii
%d bloggers like this: